In general, flight characteristics of a powered paraglider are very much defined by the glider used and only to a lower extent affected by the paramotor. One of the key features of paramotor that have effect of how the pilot can feel the glider behaviour and enjoy the flight is the hook-in system.

This article describes the most common hook-in systems, explaines the advantages and disadvangates of all of them.

Read about the brand new SCOUT hybrid hook-in system at the end of the article!!!

The basic characteristic to look at is the ability to steer the glider by shifting weight.

This is not a question of right or bad. Its a question of pilot’s preference. There is a trade-off between weight-shift ability and comfort.  Its just like with cars:

You cannot have both. The reason is that the interaction between pilot and the glider through the hook-in system is bidirectional. If the pilot is allowed to give inputs to the glider by shifting weight, the glider allowed to give feedback to the pilot the same way – the pilot will feel every turbulence more. Flying in turbulent air will be more bumpy, more shaky and more agile.  There is no difference in safety. There isn’t more turbulence, A pilot hooked in low will just feel more turbulence and gets stronger feedback about what the glider does.

Moving bars or spreaders allow more weight shift because the pilot can press one leg down to put more weight on that riser and raise the other leg up or even put the raised leg over the other.

Lower hangpoints alow more weight-shift as the pilot can actually lean over the carabiner, thus his body mass is closer to one carabiner.

Pilots who love more agressive turns and those who like to thermal will definitely prefer the low hook-in systems with moving bars. Being able to steer the glider with weight shift comes handy when taking pictures while holding the DSLR camera with both hands.

Most pilots would like to have the sporty feeling, responsiveness and feedback from the glider. Yet the most popular hook-in system nowadays are the  medium-height gooseneck bars (miniplane ABM, parajet Zenith, SCOUT, Air Conception, Kangook, …). The reason is that low hook-in systems do have some disadvantages, and the choice is not that simple.

There are other aspects of the hook-in systems that less attention is paid to:

This is simple. With the high hook-in the pilot’s center of mass hangs well below carabiners and it works like a pendulum. The torque effect is there with the same momentum, but it is just not that effective.

The pilots experiences the strongest torque effect on the low hook-in paramotors, because the center of mass (pilot and paramotor) is aproximately at the same level than the carabiners. There is no (or much less) pendulum weight to bring rotation back.

Some paramotors lean forward when pilot adds full power. This inclination is called pitch. Such behaviour occurs when the thrust line of the propeller is above the carabiners.

Power-induced pitch behaviour is most significant on low hook-in paramotors. When pilot adds throttle rapidly, the propeller pushes the pilot over the hook-in point and the pilot feels a tendency to pitch forward. Its not dangerous and does not make the pilot unstable, it is just something that the pilot has to calculate with and compensate with body movement.

Some paramotor manufacturers have eliminated this effect by lowering the thrust line, too. This way the thrust line is as low as the carabiners, or at least close to it. The thrust of the propeller transfers directly to carabiners without inducing pitch. This solution has one big disadvantage: the paramotor cage is pretty low, it is close to the ground and too close to the pilot’s ankles at take-off and landing. As the paramotor weight sits low and the cage may hit pilot’s ankles, it is unconfortable on ground. For this reason only very few manufacturers use this construction.

A compromise that still offers enough weight-shift, yet eliminates the pitch instability are the goosneck bars. These bars put the carabiners exactly into the thrust line, so that adding power does not make you swing. This invenstion came to paramotoring just recently and is increasingly popular. More and more manufacturers adopt the gooseneck bars and they seem to be most popular today.

Some paramotors tend to lean or incline bacwards when speed-bar is pressed. Again, the high hook-in paramotors behave neutral and pitch behaviour  is most characteristic for the low hook-in systems, especially those with moving bars.

The reason is that the rotation axis of the bars is lower than the main part of the pilot’s back. When the pilot streches the legs forward, he/she pushes against the paramotor back support (see red arrow on the picture).

Such inclination backwards is unwanted as it reduces the eficiency of the propeller and may cause twist. Inclined propeller has more thrust on one side than on the other. The consequences may be serious. The following video shows the twist due to inclined paramotor. The inclination was not cause dby pressing speedbar but due to bad harness setting, the effect is the same:

Pilots with low hook-in bars tend to avoid such backward inclination by pressing the speedbar downwards, rather than forward. They sort of stand on the speedbar.
A very good solution are the gooseneck moving bars. The axis of rotation of the gooseneck bars is exactly in the point where the pilot pushes against the back support when on speedbar. In this case, no inclination backward occurs. Congratulations again to this invention.

If the pilot’s preference is to maximize comfort, the high hook-in is the best option.

If one is looking for more agile steering and to “feel” the glider with maximum feedback, the low hook-in is the right choice. The pilot has to accept its disadvantages: power and speedbar induced pitch instability.

The gooseneck bars bring in some compromises with pretty good results.

There was no paramotor that maximizes weight-shift without the unwanted side effects UNTIL NOW. 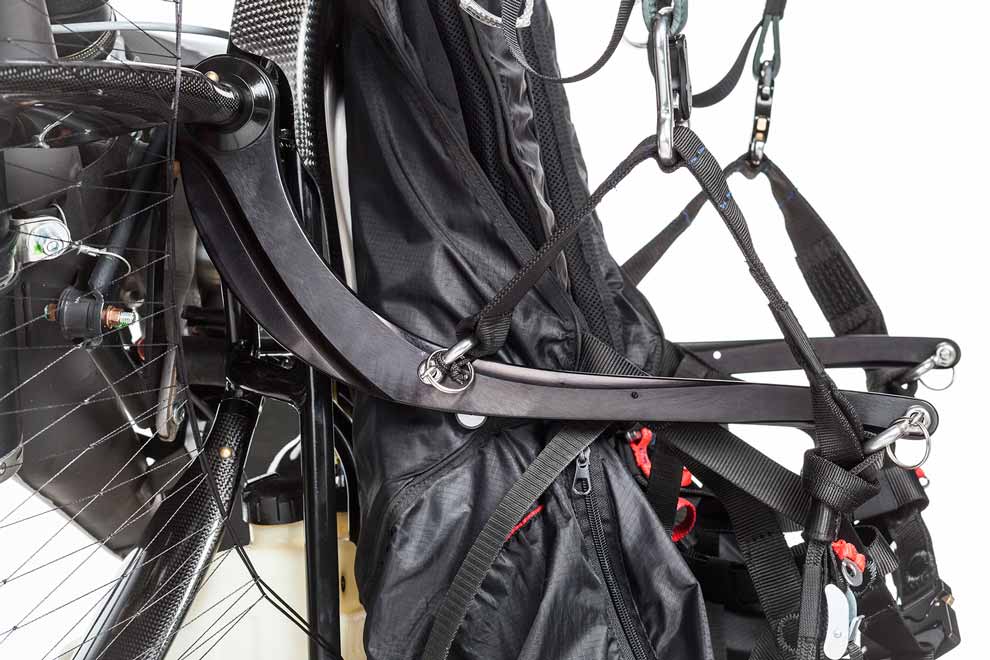 « See the SCOUT Paramotor at this years Wings Over Winter Fly In November 4-10 (Florida, US)
Review of the new EOS100 light-weight paramotor engine. »

Any cookies that may not be particularly necessary for the website to function and is used specifically to collect user personal data via analytics, ads, other embedded contents are termed as non-necessary cookies. It is mandatory to procure user consent prior to running these cookies on your website.